Showing posts from January, 2012
Show all

I was looking forward to Osaka, because I remembered being here before and getting around by myself without too much difficulty and seeing a lot. But this time I find it more confusing.  I’ve been trying to figure out why that is, and have decided it is due mostly to the weather.  Last time we were here in February.  I wasn’t expecting it to be warm and was surprised to find flowers and plum trees in bloom. I did lots of walking in parks and in the streets. This time it is January and it is quite cold, and often rainy or windy. So walking around outside isn’t as pleasant.  And walking around inside is very confusing! There are so many underground malls that interconnect. If one knew one’s way around it would be a good way to avoid the cold, but I don’t know my way around and though there are signs in English, they often don’t indicate what I am looking for.  Here is a typical picture of a mall. I think this is above ground, but the underground malls look similar. This morning I dec
10 comments
Read more

We’re in Osaka, Japan, now, which is nice, but I’m having trouble convincing the internet here that I actually want English and I don’t speak or read Japanese, so I don’t know if I’m going to be able to keep up this blog while we are here. Yesterday we visited Osaka Castle. Its history goes back to the 16th century, but it has burned down and been rebuilt several times.   We have actually been here 4 days, but two of them are just a blur, as I came down with a bad cold.  I was quite unhappy about that, but one can’t expect to go around the world and not have some troubles like that. The cold started on the day we left Beijing- Wednesday. I wasn’t expecting it, so didn’t have my zicam handy. I started taking it as soon as we landed in Osaka. I rested mostly Thursday, but was pretty miserable Friday. By Saturday I was much better and went out in the afternoon with Jim. Sunday I was over it and feel fine today. Although we have been out and I’ve carried my camera with me I did
1 comment
Read more

Kathy took me to see a natural park with unusual stone formations, called the Stone Forest. It was a fun outing. Kathy had been there before and knew there weren’t many places to eat there, so we packed a picnic. Another woman, Nancy, who was visiting from Texas, with us. Kathy hired a van to take us there. It took about 2 hours to get there from Kunming.  We started out in an area Kathy hadn’t been before. The trails took us through narrow gorges and up and down lots and lots of steps. Most of the time we didn’t know where we were. It was raining a little, so when we found a picnic table with 3 dry seats we decided to stop and have our picnic. We had ham and cheese sandwiches, Mandarin oranges, and dried peas. We put the tablecloth on the dry half of the table. After our lunch we walked around that area some more squeezing at times through narrow openings in the rock. When we came to a fork sometimes Kathy and I would go out in two directions to try to dec
4 comments
Read more 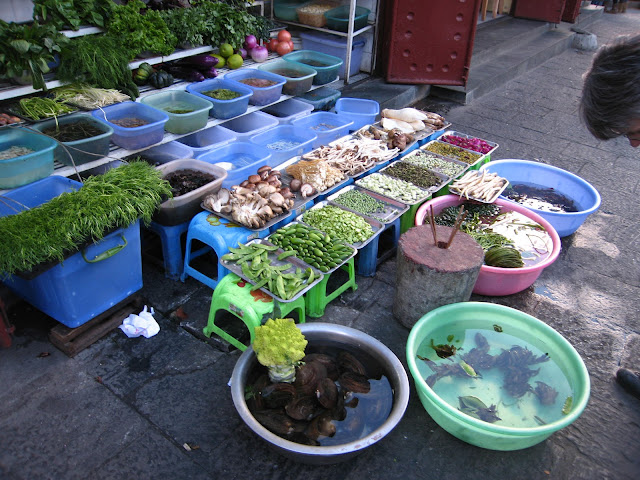 Kathy and Gregg have gone to work today.  I decided to stay in their apartment and use their computer this morning. They'll be back for lunch and then we'll go out somewhere.  This is a continuation of the day I started in the previous post.  We met up with the other ladies and all took a bus to the old part of Dali, where we walked around and then had delicious pizza made in a wood-fired oven, some of the best Pizza I've ever had. You might notice that I've changed the template for this blog. I figured out I could use larger pictures, but needed to make the blog wider.  It makes the previous entries look funny, but I hope it is an improvement.  This is not a market, but a restaurant.  You chose the fresh ingredients you would like them to cook for you and in a very short time your meal is ready to eat. We didn't eat at this restaurant, but did eat at another one with a similar system, though in that one the fresh ingredients were in a refrigerator with glass
2 comments
Read more
More posts