This is just so cool. I think I have a couple readers who admit to being technology nerds, or steam-punk enthusiasts. I’m not sure if this qualifies as steam-punk, because it might just be too authentic.

I’ve been listening to The Count of Monte Cristo through Craftlit. If you read this blog last August you might remember I said the same thing then. Yeah, at a chapter or two a week it is taking a long time to get through this book, but that’s okay. I’m learning more than I did the first time I read/listened to it.

In about chapter 61 or 62 the Count manages to convince (pay off) a telegraph operator to transmit a false message, which then causes someone he knows to sell some stocks at less than their value and lose money. The first time I read this book, I just assumed it was an electric telegraph that sent Morse Code. I was wrong, because this happened (fictionally) in 1838, which was before the electric telegraph came into use in France. Also in the book Monte Cristo likens it to an insect with moving legs. There are only 2 not 6 “legs” but I can see where the idea comes from. In the days it was operating, it was just called a telegraph, or a semaphore, but after the electric telegraph became more common, this one was referred to as an optical telegraph.

During my research, I discovered that there are 15 of these in France that have been renovated and can actually be operated, and one of them is about an hour from our house here. So that went on our list of places to visit. 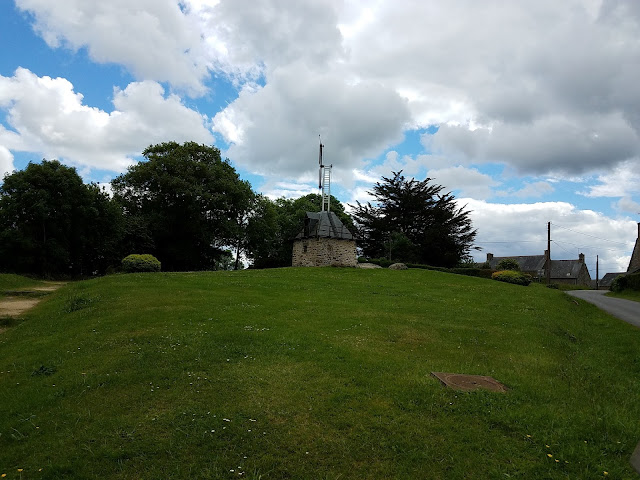 You can see the telegraph is on a hill. From the top of the hill you could actually see all around, but today there are trees blocking the views of the telegraph locations on either side. This one at Saint-Marcan is between Mont-Saint-Michel, where the telegraph mechanism was mounted on the top of the abbey, and Mont Dol, which is another mount about 10 kilometers away. The room where the operator worked had a little square window where a telescope helped him see the telegraph at both locations east and west of him. He had to keep watch all the time. When a new message was coming the first thing he would notice was the indication that a message was coming. He would turn the central support at an angle to match the one he saw. But of course he had to be aware that he was seeing the one behind him from the front and the one ahead from the back. So if the bar was leaning to the left as he looked at Mont-Saint-Michel, he had to set his bar in the same positon and then check to see that the one at Mont Dol appeared to be leaning to the right. It probably didn't take the operators as long to learn this as it has taken me to write it down. As soon as the one at Mont Dol had the right symbol, he would transmit the next symbol, and so on down the line. Before this system was operational, they had to rely on horsemen, which took 4 days to get from the end of the line at Brest to Paris. This system, when it was working well, took only 2 hours to cover the same distance. It was only used by the military or government. Napoléon and his successors used it in times of war. 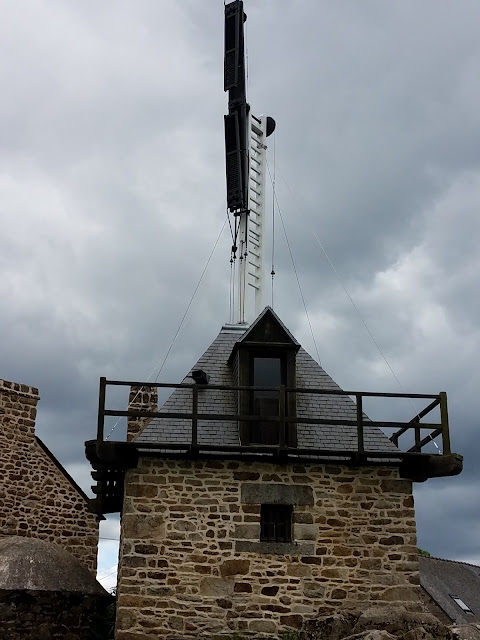 Here you can see it closer. The little thing protruding from the corner is the window pointing towards Mont-Saint-Michel. There is a similar small "window" on the opposite side. The big window provided light in the room. The system only worked when there was enough light and enough visibility to see the two telegraph posts on either side.


And finally here is a 1-minute video I took of the mechanism being put back into the rest position
after our tour.

If you are interested in learning more. This site in French is pretty good. The photos on the bottom showing some of the positions of the signals are of this one in Saint Marcan.
Wiki site in French

This one is kind of fun. Again it's in French, sorry, but this is a French thing. On this site you can click on two signals at random and it will give you the meaning of those two. Two signals were required for each word, name, or short phrase. The first from 1 to 92 gave the page number and the second (also 1 - 92) gave the line on the page. So there were 92 X 92 or 8,464 possible words,  or phrases that could be sent.
Site with more description of the signals
Scroll down to the pink box that has some symbols in it. Click on the button at the right marked "Voir tous les signaux" That will show all the possible signals. Then you can try them out.

Do let me know if you enjoyed this post. I'm having trouble motivating myself to do travelogue posts. I've just done so many of those. I thought this topic was more interesting. Also let me know if you have any trouble with the photos, the video or the links.

Unknown said…
This was fascinating Ceci. I am so glad that you chose to write it. Following up on the idea from THE COUNT OF MONTE CRISTO is a great idea. I do enjoy all your posts and pictures.
May 23, 2017 at 6:09 AM

Our next stop was Istanbul.  We were back in Europe and winter. The last time we had been in Istanbul was 1995. The city has changed a lot in 17 years. We were staying in the same area we stayed in last time and actually our hotel turned out to be just a block from the one we stayed in before.  We wouldn't have recognized the hotel or location, but we remembered the name and the fact that it was on a corner.    We arrived about 4:00 pm and went out for a walk after getting settled in the hotel. This scene is not far from Taksim square, which was walking distance from our hotel. We were happy to be in a city where the streets were walkable.   The next morning I bought a transit card and rode to the old part of Istanbul--the former Constantinople, where the most famous mosques and landmarks of the city are. To get there I rode a funicular down to the bottom of the hill. Then I took a tram across the bridge to the other part of town. This was not across the Bosphorus; both the
Read more