We passed this church, which was called St. John the Baptist de la Salle. I hadn't heard of this saint before, but I liked the statue of him with the children. 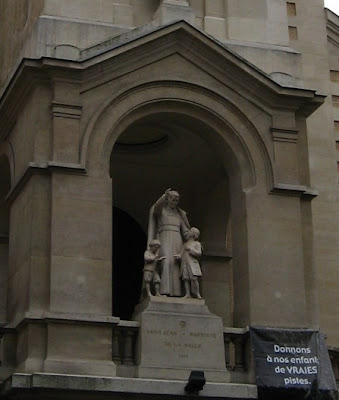 Then we passed a building on our right with lots of people walking around it carrying notebooks. They looked like students. We still weren't sure where the museum was, but through a gate on our left we saw this statue, which Jim recognised from some papers he'd read. 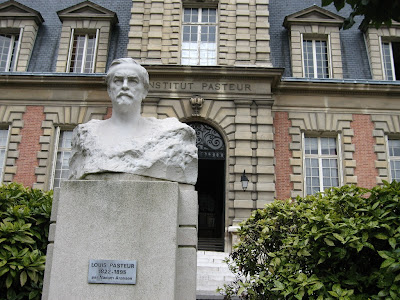 We went into the reception area at the guard house and asked for the museum and were told it was here. The girl asked us for ID's and made us name badges right on the spot. We clipped them onto our clothes and walked into the museum. Inside we saw signs directing us upstairs. The desk for the museum was empty, but a sign said it would be open at 2:00. It was 1:55, so we waited. Pretty soon a woman came along to take our admission (3 Eu. each) and then guided us on a private tour of the museum. It started in the laboratory where Pasteur had worked. There were quite a number of instruments he had used and vials, flasks, wooden models, etc. that he had used or made. There was a recorded description in English. When the woman returned Jim asked permission to photogragh one of the instruments that he was interested in. Pasteur was the first person to recognize dissymmetry in molecules, which is what Jim's work is about. She allowed me to take a picture for his book, but I don't feel it would be right to publish it here. We then toured the rest of the museum, which was his home--bedrooms, sitting rooms, a bathroom, stairway, etc. It was all elaborately furnished in Victorian style, but they didn't allow photographs. Finally she took us to his crypt. That was incredible! She did tell me I could take a picture there. If you look at the larger version of this picture you can see the mosaic depiction of rabbits on the right, which he used in his research and dogs on the left, the source of the rabies disease and it's hard to make out but the boy on the arch is the first boy that was cured of rabies by Pasteur, who later grew up to work for Pasteur. You can see two sets of feet, two of the 4 angels who represent Love, Hope, Charity and Science. Jim liked that Science got equal billing with the other virtues. 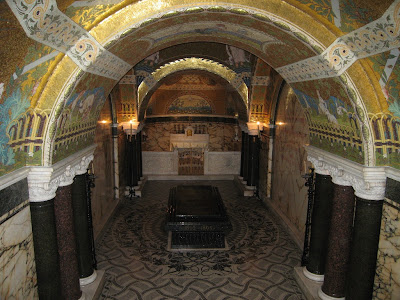 Pasteur lies in the black marble casket and his wife who out-lived him by 15 years is buried behind the gold gate closer to the altar. She didn't think she was important enough to be buried in the same space as her husband, but she asked to be close to him and to the altar. This crypt was built after Pasteur's death and his body was moved here. There was a huge funeral for him at Notre Dame de Paris. 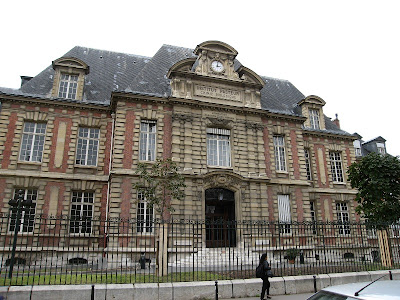 This is the institute that we passed across the street from Pasteur's home and the musem. I would move the picture up above, but I don't know how to do that. I've tried. I just can't rearrange the photos once I put them on the site. 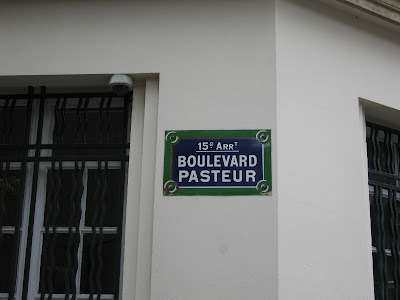 Pasteur received many honors during his life-time. You should look up all the things he did. He was the first to discover vaccination and found a vaccine for rabies. He also worked with silk worms to prevent a disease that was wiping them out. And he discovered that germs could be killed by heating and that beer could be sterilized without changing the taste by heating it to a certain point. This is the process we call pasteurization, which we know better for treatment of milk. In Paris they have even named a street after him. 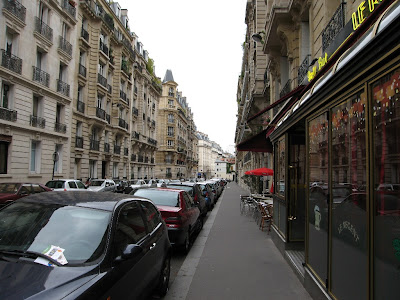 This is another street that we passed as we left the area, walking toward Montparnasse. We rode to the top of the Tour Montparnasse, which might be the topic of my next post.

Anonymous said…
Lucky you to have a whole fall to explore beautiful Paris:-)

Anonymous said…
Ceci, I loved every minute of my visit to Monsieur Pasteur's home! (Is "Monsieur" correct? I don't know any French!) Your descriptions of the home and of his work were thoroughly engaging, from finding the museum to the work he did and his wife's feelings about being buried near him - great stories! I love visiting Paris with you. Thanks so much, dear Ceci!
September 11, 2007 at 11:31 PM

Thank you so much for your kind comments. It really means a lot to me. I am so new to this blogging thing and I don't know if anyone is reading my blog if they don't leave a comment. You are both very kind to take the time to write.

Anonymous said…
Dear Cecile:
This was a lovely post. I am delighted to have found it and your blog. As the US representative of the Institut Pasteur, I love to tell people about the hidden gem of the Pasteur Museum. I would be happy to provide more information to your readers: PasteurUS@aol.com and www.pasteurfoundation.org.

Anonymous said…
This comment has been removed by a blog administrator.
January 7, 2010 at 11:25 PM

Anonymous said…
i have heard great reviews about this museam and i am looking foward to going to it
March 6, 2010 at 5:44 PM

Unknown said…
Great information !
Thanks for sharing it.......
Silagra Kaufen