We have been busy providing all the documents required for the formation of a company and purchasing this house. We hope to close on the house on September 6th.  We leave here on Saturday, arrive in Paris (Charles de Gaulle airport) on Sunday September 4th.  We spend one night near Paris and a second in Domfront. Then we hope to be in the house on Tuesday.

We drove my car to Baltimore earlier this month. We left here August 5th, spent one night in Tomah, Wisconsin, the next night at my brother's in Oberlin, OH.  He was the only one home. His wife and daughter were coincidently both in Minnesota.  He and his wife are two of our partners in this adventure. We showed him more pictures of the house and left some Asterix books with him, that he is going to bring over to the house.

So here is the location we drove to in Baltimore.

That's it. Just a chain-link fence.  They wouldn't let two of us go in, so Jim drove the car following a TWIC escort, who took him to all the offices he needed to go to to set the car up for it's overseas voyage. Then she dropped him back at our hotel, which was only a few blocks from here.  We took our suitcase - we just had one- on the free shuttle into the inner harbor in Baltimore, had some lunch there at one of the food courts of the shopping area. Then took a train out to the airport, which cost us $1.65 each. From there we flew to Duluth and took a taxi home. We are sharing a car this month, which has been working out fine. If I need the car I drive Jim into work, but I can get along fine without a car most days.

We are now tracking the vessel that will be carrying the car to Le Havre, France.  It is the Tropicana, owned by Norwegian company Hoegh.  We have been able to track it's progress on this site. Today it is in Jacksonville, Florida. It is supposed to be in Baltimore tomorrow. We are hoping Irene (Hurricane) doesn't interfere with these plans.  We want it to arrive in Le Havre as scheduled, so we can pick it up there on September 9th or 10th. We are scheduled to leave for Poland on the 13th, so we don't have too many extra days in our schedule.

Here is a photo of the ship. 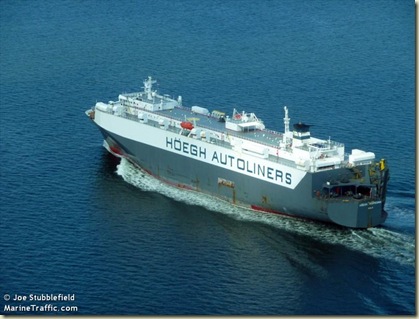 So keep your fingers crossed for us that all goes as planned. :-)

Diane/Wileysmom said…
How exciting for you guys, Ceci! So, with all the pics and me just seeing this, are there pics (outside and/or inside) of the house you guys are buying? Again, very exciting and I am very happy for you guys. I know with your travels you will surely enjoy having your own "stopping place" there. :-)
August 22, 2011 at 11:25 AM