On Wednesday I took an all-day tour of the old part of Istanbul with Istanbul Walks.  I recommend this company. They have lots of options for walking in various parts of Istanbul. My guide was very well-informed and gave me more historical background than I could absorb.

I met him outside the entrance to the Hagia Sophia museum. We were joined by a guide in training. I was the only customer that day. It was cold and rainy, which you will see in the photos. We first visited the Blue mosque, but I had visited it on Monday, so the pictures of that mosque are on that post.

From the Blue mosque we went back to Hagia Sophia.  The Blue Mosque closes at noon and my guide told me that because he talks so long, he sometimes doesn't finish with both before noon, so he liked to start with the Blue Mosque.

Here is the outside of Hagia Sophia or the church of Divine Wisdom. The current building was built in 532 by emperor Justinian on the site of an earlier Christian church, built in the 4th century by the first Christian Emperor of Byzantium, Constantine. It was a Christian church for over 1000 years, but in the 15th century was turned into a mosque. In 1935 the republic of Turkey turned it into a museum.

We entered through the main entrance, which is not that impressive.

Inside we climbed to a balcony, where I took this shot from.

When the building was turned into a mosque the Christian mosaic images were covered with plaster.  On the upper left one of the angels has been uncovered. You also see the structures and large panels that were added when it became a mosque.

From here we went to a restaurant for a typical Turkish lunch and then went to the Topkapi Palace of the former sultans.

Here my guide is explaining the symbolism in this coat of arms.

This palace, like most Asian palaces is a campus of buildings with gardens and courtyards inside.  Here are some of the interior gardens.

The following are pictures of some of the decorated walls within the palace.

And the corner of an overhanging roof.

From the far corner of the palace you can see out over the Bosphorus. The train tracks in the foreground are the last part of the Orient Express. On the right is Asia and on the left Europe.

This shot is looking back at the European part of Istanbul, where our hotel was.

And these were my guides for the day. Aren't they cute? 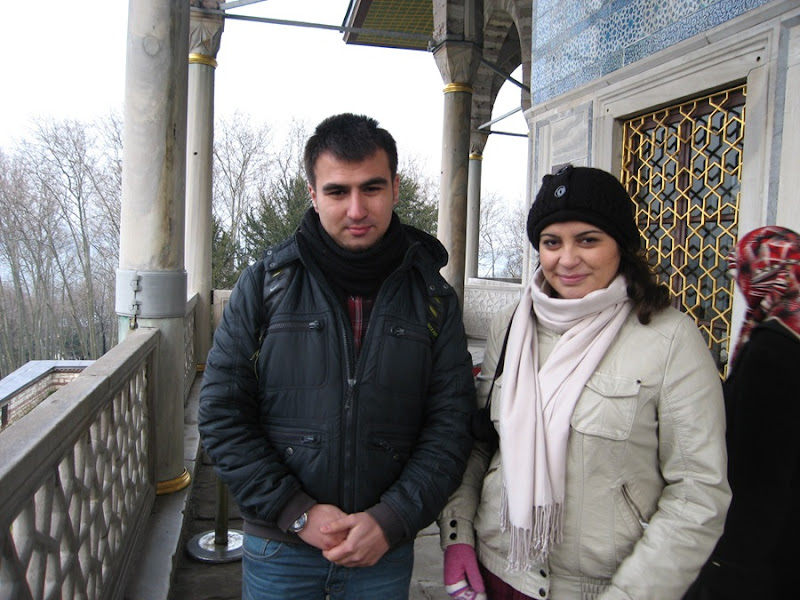 So this is the last of my posts for this around-the-world trip. We came back to Duluth on February 17th and have been enjoying a typical snowy winter here.  We head back over to Normandy, France on March 17th.

Thanks for following this blog and especially for your comments.  It's nice to know who is reading and that you enjoy my photos.

I'll try to post some more from Normandy next month.

Our next stop was Istanbul.  We were back in Europe and winter. The last time we had been in Istanbul was 1995. The city has changed a lot in 17 years. We were staying in the same area we stayed in last time and actually our hotel turned out to be just a block from the one we stayed in before.  We wouldn't have recognized the hotel or location, but we remembered the name and the fact that it was on a corner.    We arrived about 4:00 pm and went out for a walk after getting settled in the hotel. This scene is not far from Taksim square, which was walking distance from our hotel. We were happy to be in a city where the streets were walkable.   The next morning I bought a transit card and rode to the old part of Istanbul--the former Constantinople, where the most famous mosques and landmarks of the city are. To get there I rode a funicular down to the bottom of the hill. Then I took a tram across the bridge to the other part of town. This was not across the Bosphorus; both the
Read more