Our little village puts on a festival every August 15th. We have only been here to experience it once before, but wanted to be here again this year on this day. 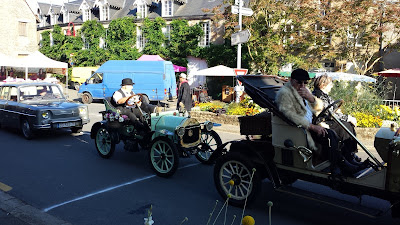 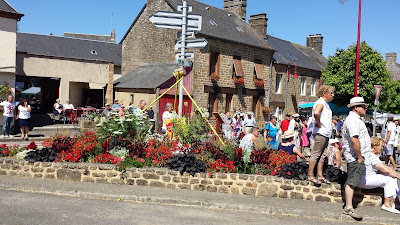 The village also enters an annual flower competition and has won the top category for flower display every year since 1988. The color schemes vary every year. This year they used a lot of black--black foliage and black petunias. Up close these petunias are not dark purple. They are black. This bed is black, red and white. The restaurant in the background is reopening after being closed for about 3 years. They were serving drinks for the festival. 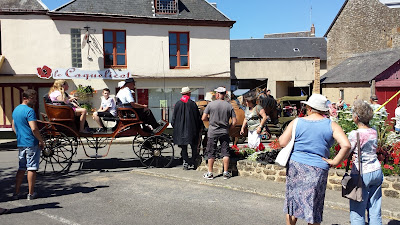 There were some American jeeps in the parade from the liberation forces in 1944. You see one here behind the flower bed and a horse and carriage that was not part of the parade, but was just giving tourists rides. 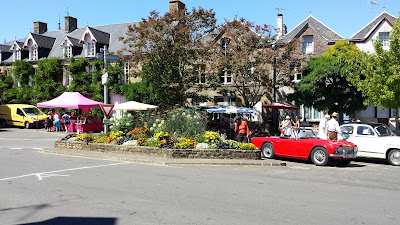 There were booths lining the mains street selling crafts, jewelry, wooden items, cloth bags and aprons, and lots of home-made and local food products. I bought a home-made Camembert. The vendor asked me if I was going to eat it that day! This is why cheese tastes so much better in France. You can buy it for the day you want to eat it. 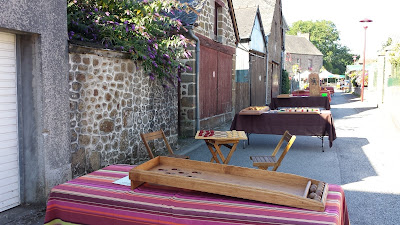 Our house is right in the middle of the action-literally. There were booths just outside the front door. This is the street behind us. Our garden is behind the wall where the butterfly bush is. You can almost see our gate and the red garage door is ours. In this street they set up lots of wooden games, which were in use all day once people arrived. I took this before the crowds showed up. 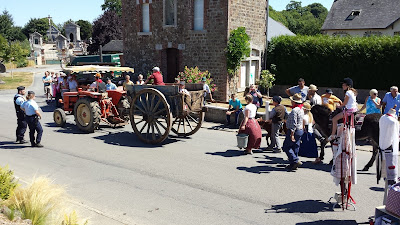 This is part of the parade of old farm machinery. Here you see a tractor pulling a hay wagon with a calf and girl with milk bucket just behind. More people in old farm costumes behind them. 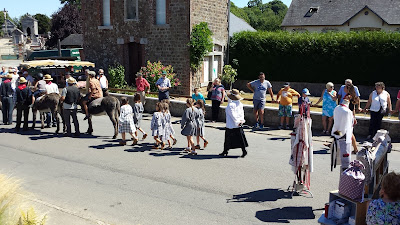 And behind them were school girls dressed in 'tabliers' or school smocks from the 1950's. I was in elementary school in the 1950's, so this is my generation. they were also wearing wooden shoes. 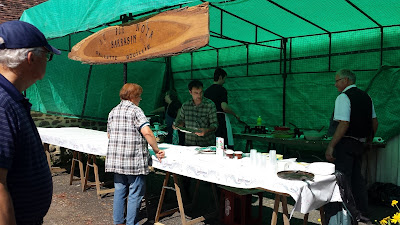 Here they were serving buckwheat crepes or galettes. You could get them with sugar and butter, jam or with a local sausage. We bought two with sausages and took them back to our garden to have for lunch. They were very good. 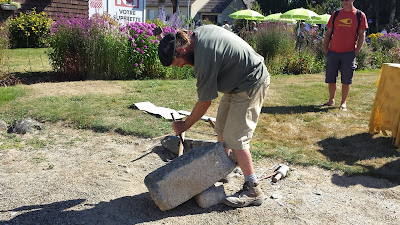 This man was carving a stone by hand-just with a hammer and chisel. 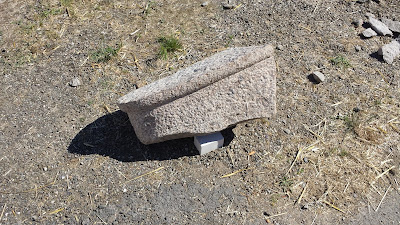 I believe the one he is working on above will look like this when it's done. It is obviously part of a bigger project.

There were demonstrations of threshing wheat by hand and then by machines of different periods. There was a dressage show, demonstrations of spinning wool, milking a cow, making butter,  preparing apples for cider, and more.

We went back out at 7:00 for supper. They served it cafeteria style, which they call 'self'. The choices were sausages, 1/4 melon, cut up tomatoes with a 1/4 hard boiled egg, nectarines, frites, baked potatoes, sliced bread, and a chunk of Camembert,  I think that was the menu. You paid for whatever you took. The choices for drinks were cider, beer, coke, water, or wine--all pretty much the same price. (I think the water was cheaper, but it was not sparkling) They also had coffee and ice cream for dessert. After that there was music and dancing, but we headed home. It had been a pretty long day already.

Well, this is the first blog post I've done in two or three years. I don't know if I am resurrecting this blog or if this is a one-off. We'll see how this goes.

Cécile said…
Thanks for your comment, Dawn. I may find time to do some more posts while we are here.

Rose - Watching Waves said…
What an utterly charming village that you live in, Ceci! I just love your descriptions of everything. I'd much prefer a local parade and festival over some big-name-sponsored major, over-the-top event. It seems like something I'd enjoy a great deal. I'd take my galette with jam. :-)
August 26, 2016 at 1:51 PM