Back Home in Duluth

December 03, 2007
We arrived home late Friday night Nov. 30th. I heard from the woman sitting next to me that they were predicting 6-12 inches of snow for Saturday. At this time of year we hardly ever get as much as they predict, but I thought some snow would be nice.

Sure enough, the next morning after we got one car started and got some groceries the snow started and continued all afternoon. On Sunday we shoveled ourselves out. We have a walkway to the front of the house and another one going back to the alley, where the cars are, so we really have to shovel both front and back, but a wonderful neighbor was having fun with a new snow-blower and did the sidewalk out by the street. That's a big part of the job, so we really appreciated that.

Now, I've been tagged. I appreciate the honor and am going to try to follow the rules, which say that I have to list random facts about myslef beginning with each letter of my middle name. My middle name is MARGARET, so this is a challenge for me.

I Married my college chemistry teacher in 1972. I like to say he’s much older than I, but we’re really only 3 years apart. He was a 2nd year grad student and I was a 3rd year undergrad when I landed in his Chemistry lab for Chem 101 or whatever the number was. Thirty-five years later, I know it was the right decision. 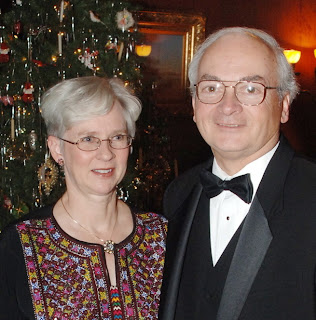 (This was taken last year at a Gala Christmas Party.)
I Am 56 years old. I was a kid in the ‘50’s, a teenager in the ‘60’s and a college student, newlywed and young mother in the ‘70’s. They were great decades.

I Read novels and memoirs in French. Last summer I enjoyed 4 novels by Claude Michelet about an agricultural town in central France, and then read his memoir of his childhood. I’m reading some Colette, now.

I Get to travel to all kinds of wonderful places with my husband. We even went around the world in 2006, stopping in Beijing, Shanghai, Kuala Lumpur, Karachi, Quetta, Dubai, Pisa, Florence and Rome. If you want to see those pictures, they start here with Beijing.

I lived in Africa for a year. In 1969-70 I lived with my family in the Congo. That was before it became Zaire, which is now again the Congo. 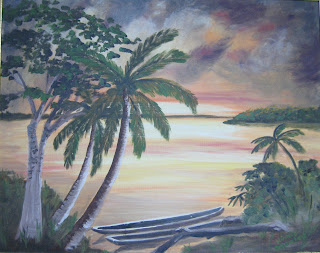 (My mother painted this during our stay there.)

I’m a Rosemaler. I started trying to learn this interesting folk art in 2001 and have been working at it off and on ever since. I hope I am still improving and will continue for many years to learn and get better at it. Here is one of my painted plates. 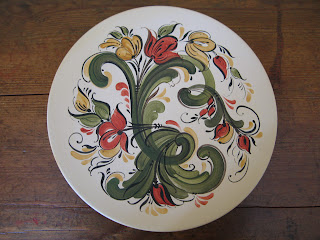 I Enjoy working cryptic cross-word puzzles. A lot of people have never seen these, but they are the standard type of cross-word in England. I am doing some really challenging ones right now written by Frank Lewis for ‘The Nation.‘

I Try not to brag too much, but I’m really proud of our two sons. They both have PhD’s now. James just finished his in October. They live in Boston and Santa Barbara. They have great jobs and are fun to have around. And they’re both single, play the French horn, enjoy sports and outdoor activities, so if you know any sweet girls…. (Just kidding guys.)

My legal middle initial is S. which is the only way I could figure out how to get this one in.

I love Snow and skiing, snowshoeing, sledding or just walking in it. It makes me happy every time I see it, falling, on the ground, even in the form of slush. 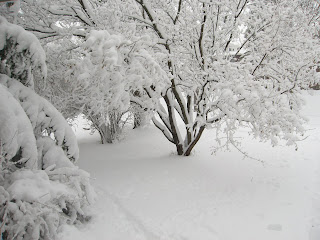 (This was taken in our front yard after a big storm last March. We don't have this much snow now.)

Maureen said…
Ceci I just loved reading this! You are fortunate to have such great sons and a great husband and the opportunity for frequent travel! Great post! Thanks for playing tag. Now you and I can both duck and hope we don't get tagged again!
December 5, 2007 at 6:35 PM

Anonymous said…
Oooh, that snow picture is beautiful. I can't say I miss it though -- even in 100+ degree days in Texas, I still shudder at the thought of a Wisconsin winter.

Britt-Arnhild said…
Hi Cecile.
What a great post. Now I feel I know you so much better.

Unknown said…
Truly it is very nice to read this kind of blogs, you really share interesting post. Thanks for posting…
shipping services in hyderabad.
June 16, 2014 at 11:02 PM