A Literary and Serendipitous Trip

June 08, 2017
I’ve enjoyed reading the saga of the Vialhe family, written by Claude Michelet(1). It follows the lives of a fictitious farm family in a small village in France from about 1900 through the 1980’s. The stories are well-written and the characters likeable and interesting.  I think the first book of the series is the only book I’ve ever read 3 times. I read it twice in French and once in English. So I wanted to visit the part of France where these books are set. I had discovered that the fictional village of Saint-Libéral was based on Perpezac-le-Blanc in Corrèze. This is the village where the author’s parents-in-law lived. He uses the real names of all the other towns around this one, so the other town names in the area were familiar to me. Then I also discovered that the town only a few kilometers away, Saint Robert was the one used for the setting of the TV mini-series based on these books. When we travel, I usually pick out the places I want to visit and Jim finds hotels where we stay. After a light lunch at Chateauroux we were looking for a place to get a coffee and stopped at Pierre-Bouffière, which had a restaurant and hotel, according to the signs on the road. We parked in the town center right across from this hotel. 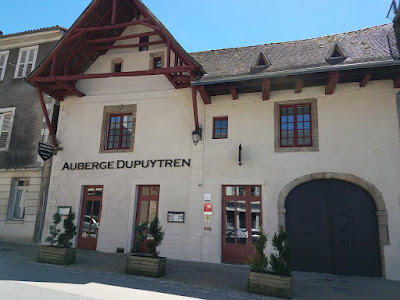 This name may not mean anything to you, but I had just seen my doctor at home about a lump in my palm and been told it was Dupuytrens Contracture. It’s a name that’s hard to remember and even harder to pronounce. Dr. Dupuytren was born in this village. While we were here we visited the church, but we didn’t find a place to have a coffee, so got back on the road. We walked around the quiet town of Uzerche and had an ice cream. By that time it was too hot for coffee. 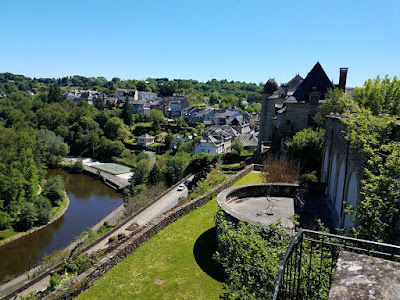 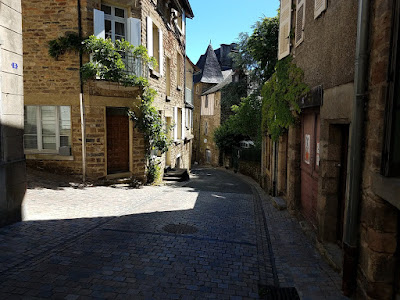 This night we were staying just north of Uzerche in a hotel next to a tower on a hill. We had a nice view of the tower from our window. I think the tower is not very old, but didn't learn much about it. 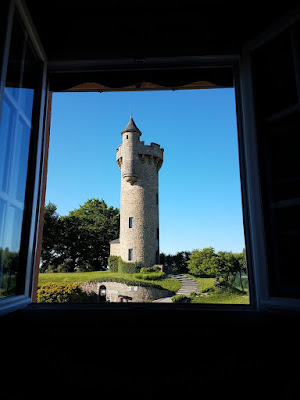 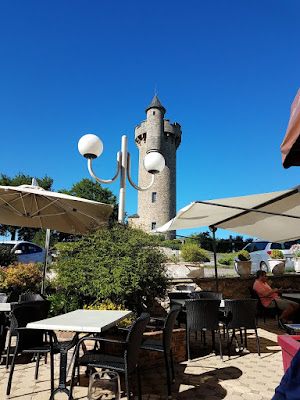 Next morning, after a lovely breakfast in our hotel courtyard, we headed out towards Saint-Robert and Perpezac-le-Blanc, the two towns associated with the novels by Claude Michelet. I could see why the director of the mini-series chose Saint-Robert over Perpezac to represent the town of Saint-Libéral. Its church is quite a bit more attractive. Here’s the church in Saint-Robert. 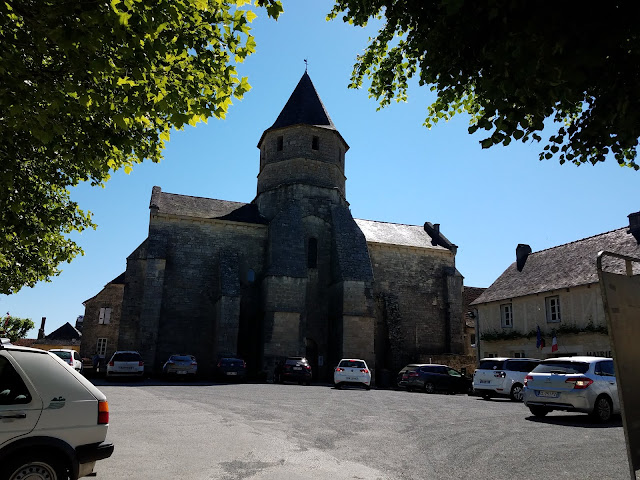 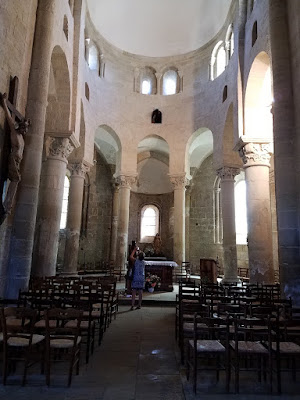 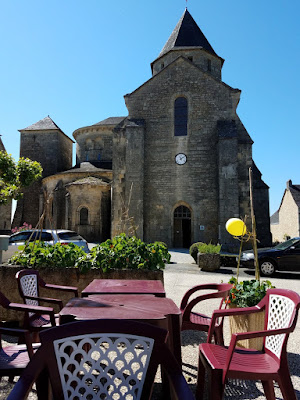 And here’s the one in Perpezac-le-Blanc. I hate to use the word ugly, and there are so few instances here in France that I feel it applies, but, well you be the judge. 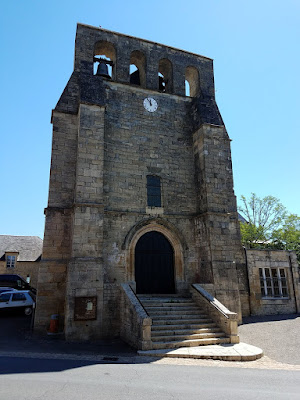 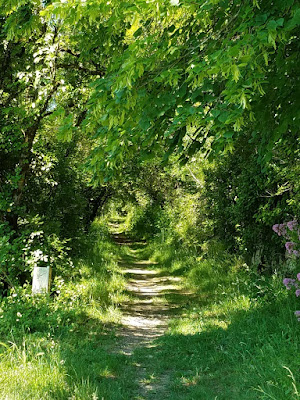 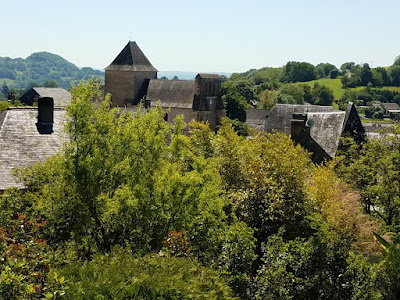 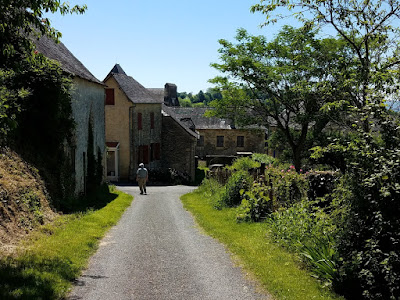 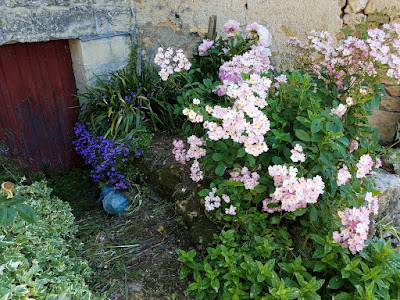 We walked up a path that led above the town, then back to town and down the hill to the mairie (town hall). In most of these small towns, the mairie is right next to the church and I had pictured it that way when reading the novel, but in this town it is down the hill. Here’s the mairie and above it the chateau. Both these institutions feature in the novel. 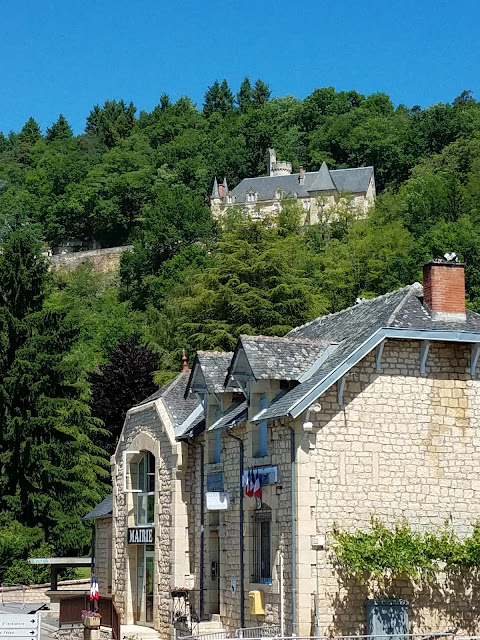 We had been staying in less expensive hotels, most of which didn’t have elevators or air-conditioning. Jim decided to pick a nicer hotel for one night and found one in a chateau called Castel-Novel. It was lovely. It had a small elevator, but the bellhop carried our suitcases up the stairs, while we rode the little elevator. Later we came down the stairway, which was an old stone spiral staircase in the tower that you see in the photos. 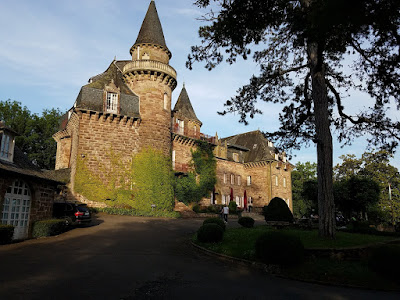 The next morning after breakfast in the hotel, we drove about 500 meters down the road to visit a garden called the Jardins de Colette. I’d seen brochures for these gardens, but didn’t know they were right next to this hotel. And didn’t realize the Colette referred to was the author Colette. I am currently reading one of her books, La Vagabonde(1910). The gardens here are divided into sections representing different places that Colette lived. She lived with her second husband Henri de Jouvenel in the Castel-Novel from 1911 to 1925. 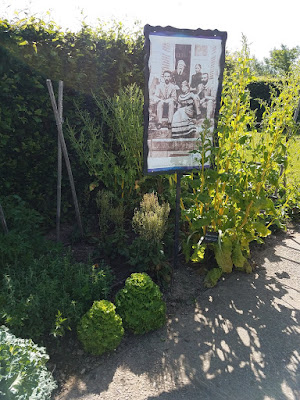 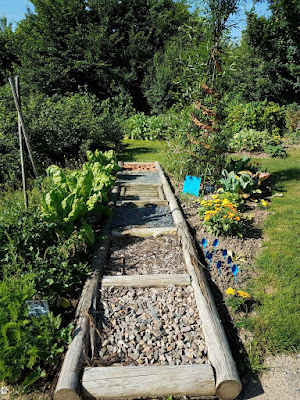 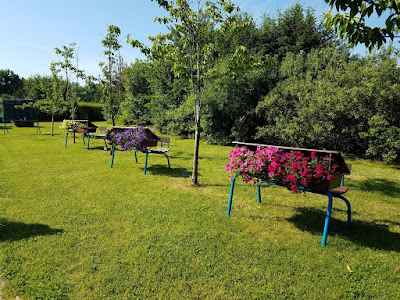 These are some pictures taken in the gardens. There were pictures of Colette and her family, games for children and other items representing her life and her books. The earliest books she wrote were about a school girl called Claudine, so the school desks come from that period. It is still early for French gardens, though it is plenty warm here. I would recommend these gardens for children and young people. There was a challenging maze. Here’s a picture of it. It was really big, with 4 different sections. We walked around the first section and got lost a couple times. There were panels with excerpts from the books by Colette, where you needed to write down clues, so that when you found the exit door to the next section you would be able to open it. It would have been fun, but we had a full day planned and didn’t take the time to finish the maze.  They told us it would take about 75 minutes and given how long we spent just exploring a small section, I believe it. 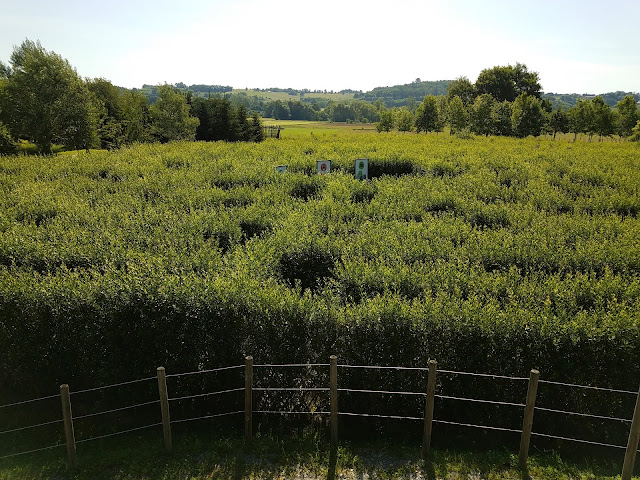 Check out the web site for a much better picture of the maze, showing the butterfly shape.

In case you missed it, the same thing happened to us last year. Jim booked a night in a hotel in Saint-Germaine-en-Laye, which turned out to be the place that Dumas was living when he wrote Le Comte de Monte Cristo, which I was listening to at the time. (See my post for Sept. 2016.)

Unknown said…
Interesting building in quaint settings with literary and medical information thrown in. Nice!
June 12, 2017 at 11:07 AM