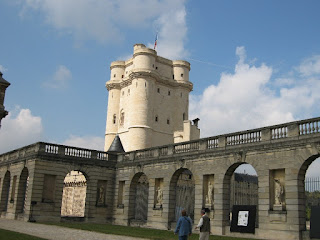 Many European countries celebrated their heritage on September 15th and 16th. Here in Paris many museums were free and other public buildings that are not normally open to the public were open for part of all of the weekend. At the chateau de Vincennes they were having a special two-day medieval festival. There was to be a dinner and ball in the evening at which medieval costumes were required. They gave a phone number to call to rent costumes. Since Jim is out of town, I didn't think I wanted to go to a dinner or ball without him, so passed on the costume. But I did want to go and see the costumes, so I went for the parade Saturday.
My pictures are here.
On Sunday I went into Paris and got inside the prime minister's residence, the ministry of agriculture, the ministy of education, the town hall of the VIIème (each of Paris's 20 arrondissements has its own mayor and town hall) and the ministry of foreign affairs. That last one was spectacular. Again I took lots of pictures, except not at the prime minister's residence, where it was strictly forbidden. I will try to get those pictures organized on a web page, and let you know when it's ready.

Anonymous said…
It blows my mind to think about the donjon being completed in 1373 - goodness! Great pictures and great commentary throughout (hard to find a good arsonist - lol!), Ceci, which adds to the delight of seeing Paris through you. Great parade! I totally cracked up at the pic of the knight on a horse! And also the part about the horses at the end of the parade. Oh, Ceci, what a time you are having!
September 18, 2007 at 1:33 PM

Coming from someone who was in many parades in her youth...there were times, when I wished the horses were in the rear!!

I love all the costumes! Amazing!

Maureen said…
Ceci. What fantastic photos! Sounds like a fabulous time. I would loved to have seen which costume you would have chosen! Thanks for sharing your France.
September 20, 2007 at 7:50 AM