May 11, 2012
We are back in Normandy after a month at home in Duluth. It’s warmer here than it was there, but is still cool. It’s stopped raining, however.
We talked to a builder today and he is going to start on Monday.  So I took some more pictures of the attic before the space gets covered up.  He is going to add insulation, including on the other side of the bathroom, which was never insulated.  We think the bathroom was done rather recently, possibly in order to help sell the house, but we are just guessing about that.  The bathroom on that level has lights in the ceiling, but no  electrical outlet. He said he could put an outlet near the sink, which we think would be useful.
So here are some photos: 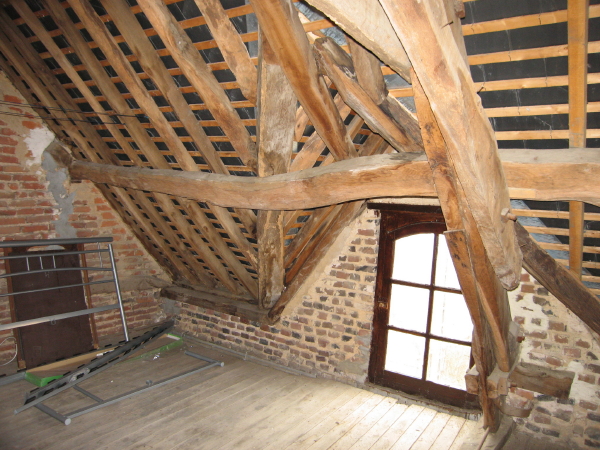 Right now in order to approach the window one must duck under that beam, which is about 4.5 ft. high.  The builder suggested cutting the beam away to make a dormer that one could walk into.  I was skeptical about cutting these beams, but he said it would be no problem. He will add reinforcing material. He will replace the window and also install two skylights, so that will really brighten up the space.

These beams will remain in place and stay exposed, but in order to add adequate insulation the ones along the roof will need to be covered. On the right here you see the studs for the wall that was added to create the bathroom. The door to the hallway is open and you can see a black metal shelf unit out there. We might move it into this room when it is finished.
Another problem we have with this space is this metal rod that goes across the space right in the middle of the room. 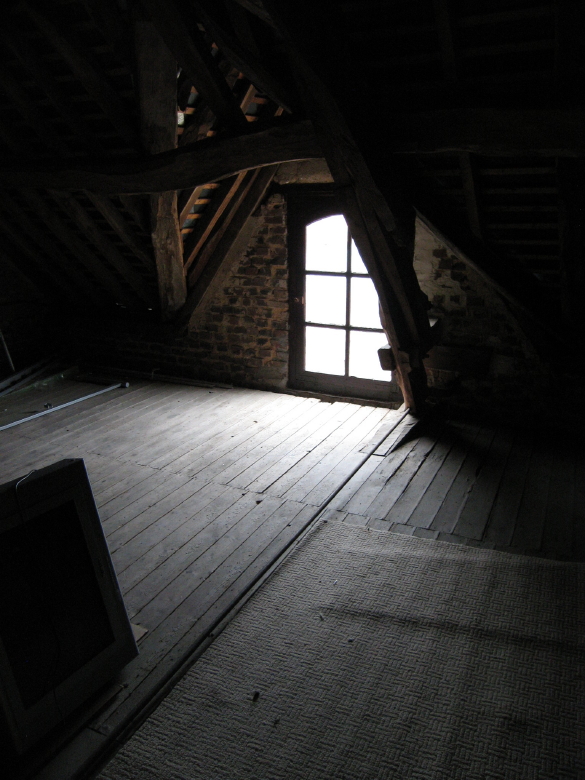 The builder said this rod holds the house together. It is bolted to an A-frame beam on each side of the house inside the attic. Here is the end of the iron bar and the nuts holding it in place.

On the far side of the beam above you can see another metal bar.  Here it is again from the other side.

That flat bar goes into a threaded bolt, which goes through to the outside. That funny looking bracket beside the window below must be the end of the bolt or a nut. It is covered in stucco and paint.

This is another shot looking east. The bathroom is on the other side of the wall on the left.

The roof is quite new and in good shape. Here you see the slates and you can see there is absolutely no insulation here.

As long as I was outside I took a photo of the flower pots that Alice planted.  They are doing well.

Last year the village had planted large concrete vats. There was one where you see that lighter spot on the sidewalk, but they removed all of them over the winter.  We are sorry to see them go, though it is true they took up a lot of room on the sidewalk.
I’ll try to post progress pictures of the construction in the attic.
Also I have added an e-mail subscription form in the right sidebar. Try it and let me know if it works.
attic grenier Normandy house renovation